Well it's not that often that we get four whole days off work/daycare/school to spend together as a family, and with chocolate, bunnies and hot cross buns thrown in it's all pretty fabulous.
We have had a fabulous Easter hanging out together and getting a few jobs done around the house.  We still have a whole garage to clear out and suddenly one day left to do it but more about that later.
A wee trip through our day in pictures.
One wee bunny here was not impressed that breakfast didn't solely consist of chocolate. 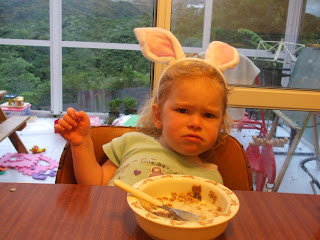 Things perked up quickly though at the mention of easter egg hunts. 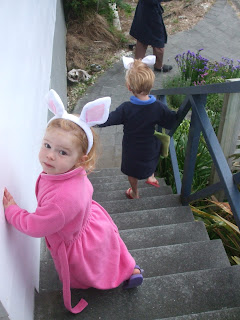 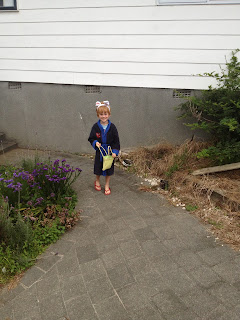 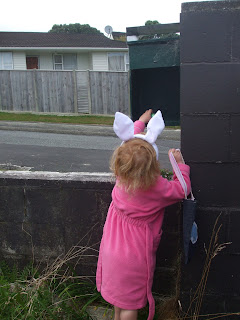 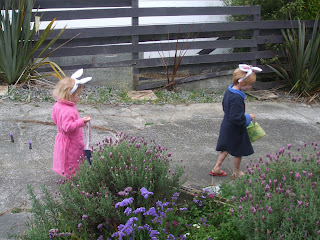 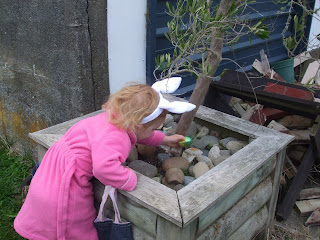 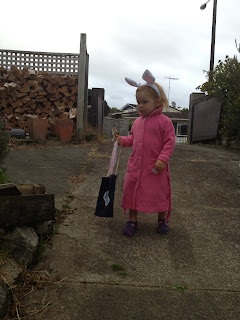 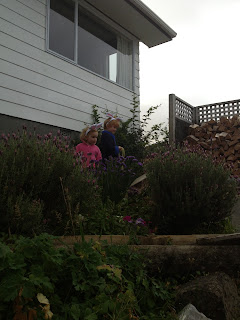 Even the cat joined in. 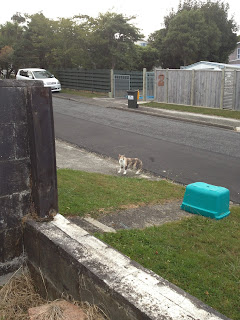 We opened some very cool gifts from afar including these awesome wee chicks from Granny, Mr A thought his scottish chicken was fantastic. 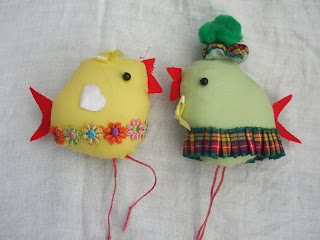 Then it was time for egg decorating.... 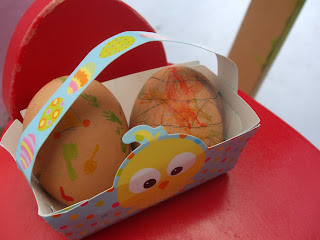 in preparation for egg rolling once the rain cleared this afternoon.  We went up to the school for this and threw in a bit of general running around and aerobie playing to boot. 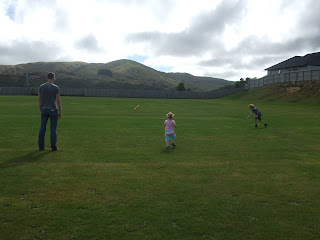 I hope everyone else had a happy and safe easter.  There is a lot going on here and I will come back with some of that news soon.
Posted by Alison at 9:52 PM 1 comment:

One of the things I LOVE about Ravelry, and there are many, is the forums.  It is nice to be able to chat to people in different groups with similar interests.  One of the groups I am a member of is the one from my fab LYS Holland Road Yarn Company.  This year they have been running a bit of a crafting challenge called "Focus on Finishing", a challenge to pick up those long lost and forgotten WIPs (works in progress) and actually finish them.
As a person who often has severe startitis which results in multiple projects on the go at any one time, it isn't uncommon for me to have a few projects languishing unloved at the bottom of my knitting bag.  This is one such project.  It is actually the first project that I cast on in 2010!  Yes you read that right 2010!  It should have been a quick wee project and if I aded up all the knitting time it probably was, the thing was that I started knitting it and then I found out I was pregnant with Miss M.  Between completely losing my knitting mojo for the first few months, the great satisfaction of making teeny tiny baby things, and the realisation that this wouldn't fit me for ages anyway, it was soon shelved.  Last summer I got it out, finished knitting the body then got scared that I was going to run out of yarn for the straps so again put it aside.  This time round it finally got finished (and for anyone interested I had quite a bit of yarn left over.
So the vital statistics of this project are that the pattern is Razor Cami and the yarn is a merino silk blend from GrrrlShaped yarns (which is no longer in existence) in colour way Theresa.  The lace pattern is really easy to remember and the pattern itself is well written.  No complaints at all :-)
Pics: 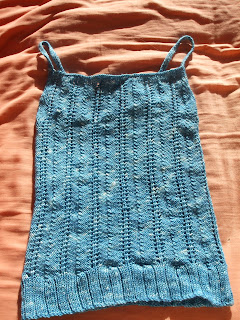 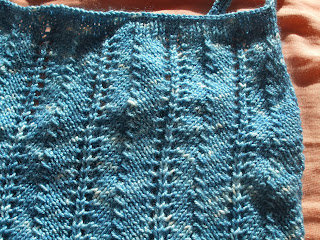 Once again the pics I have of me wearing this are completely rubbish.  I will try and get better ones next time I wear it. 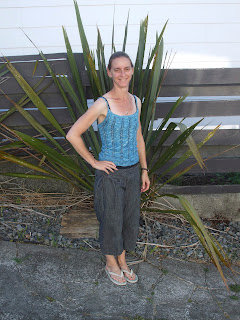 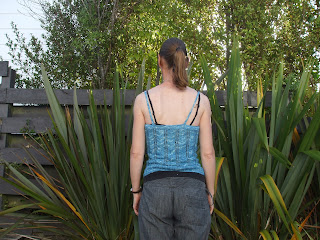 Posted by Alison at 9:34 PM No comments:

FO: Top for Me

Last year a friend introduced me to some fantastic one day sewing workshops that happen locally approximately once a month.  I am now kind of hooked, what could be better than 6h sewing time, child free, without interruptions and with a teacher on hand to answer all those questions I usually just ignore when sewing at home.
Recently I attended one of these sewing days and decided that instead of packing my bag full of things for the kids I would take sewing or ME!  In fact so far the year has been mostly about "selfish crafting" and I'm kind of liking it.  The fact that may children have both grown and will need new winter wardrobes this winter isn't lost on me though so I know I will get back in the loop of making things for them.
Anyway a top for me.  The pattern I chose was Burda 7828, but of course I didn't want it quite as written. 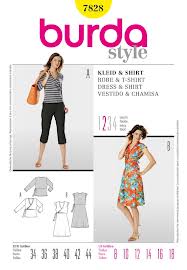 I love the shape and style of this pattern but it has a tie on the side which I didn't really want.  Instead I cut both fronts to the left front pattern and just sewed them both into the under bust seam, omitting any need for a tie.
I grabbed this pattern in a destash for about $3 and the fabric I used I also got in a destash for about $6 so all up a very cheap wee top.  I cut a size 34 and the only adjustment I had to make to size was to take a little out of the top of the sleeve seam as it was a bit too wide across the shoulders for me.
So here is the end result (obviously not ironed, oops). 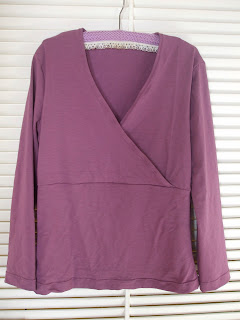 I did the front neck seam and the bottom hems with a twin needle and I love the result, and it is so easy!  I borrowed one from someone else at the workshop but will be investing in one very soon.  Of course alternatively I could get my coverseamer up and running but this seems much easier. 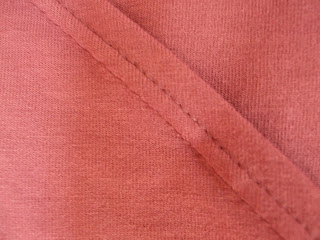 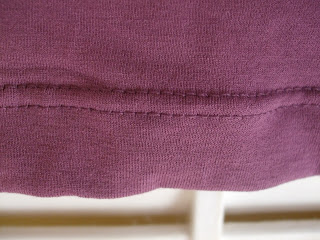 And here are a few, particularly rubbish, modelled pics.  Remind me never to let DP tell me how to stand for photos again :-P 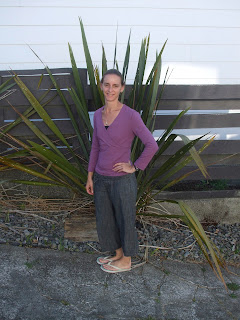 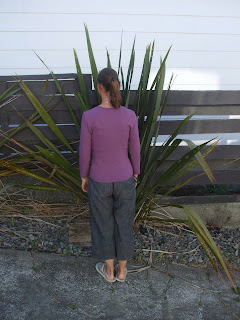 And while we were taking these photos this is what the munchkins were getting up to. 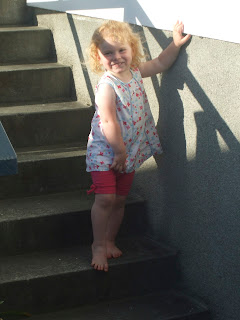 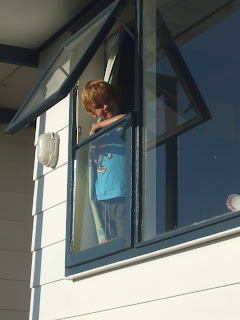 Posted by Alison at 1:25 PM No comments:

In this day and age of computers, iPads, and all things gadgety for kids it is all too easy to forget that kids still like good old fashioned fun.  I have a dear friend who often blogs about trying to keep things simple in life and every time I read one of her posts I get the urge to try harder to do this and then instantly fail at it, lol.
Over last weekend I came to realise two things: 1) that the wee community we live in is awesome and 2) that it doesn't have to be high tech, flashy or expensive for kids to have a blast.
Last Friday our local school had an Eat, Meet and Greet family picnic.  This was primarily a chance for families to get together and meet each other and also have an informal chat with the teachers etc at school.  So off we trundled up the hill with our picnic blanket and picnic tea and found ourselves a spot in the corner of the school field.  To be honest I couldn't really be bothered going and had Mr A not hounded me constantly from the time he got home from school I probably wouldn't have, but I am so glad we did.  In the simple environment of a picnic we got to meet so many other kids and families.  There was a big trolley of sports stuff out for everyone to play with (frisbees, balls, skipping ropes etc) and that was it, we chatted, ate and all had a blast.  Yes it was a fundraising event for the school, they had a sausage sizzle and a jaffa roll, but it didn't feel like it was all put on to grab money.  Unfortunately we didn't take many photos while we were there as we were too busy playing but here is Miss M, not to be left out of the fun. 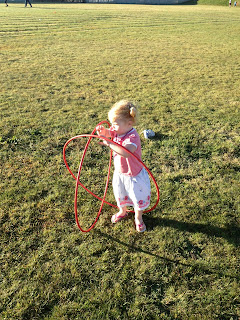 And for those of you who were paying attention you did read correctly when I said Jaffa roll.  The school sold jaffa's for $1 each and each one had a number on them.  Then they rolled them down the school driveway (it helps that we are on a big hill) and the first one to the bottom won a percentage of the earnings, plus there were spot prizes as selected by the teachers.
Here is what it looked like on the night.
So after having an awesome time at the school on Friday and enjoying the fact that the school is still the focus of our wee neighbourhood, on Sunday we went to our local community centre for an afternoon to celebrate International Children's day.  I had no idea what to expect but was ready for the usual bouncy castle, soft drinks on sale and not much else.  But how wrong could I be.  As we arrived the kids got given a card each to collect stickers on and they got given a sticker for each activity they tried.  Everything was low key and simple, they had to do things like walk along a wiggly line drawn on the concrete. throw a tennis ball to knock down a stack of cans, throw wee beanbags into a basket, kick a soccer ball into a goal and crawl under big sheets pinned to the ground with big rocks.  We had trouble dragging the kids away even once their sticker cards were full and they had been given their wee prize (a bouncing chicken toy for anyone who was wondering).  Did the kids miss the bouncy castle and candy floss?  Nope.  Did we miss the entrance fee and constant nagging to buy more stuff?  Nope.

It was so nice to come away from a weekend knowing that you don't have to go overboard to entertain the kids and you don't have to spend lots of money either.  And probably most importantly loving the wee community we live in more and more all the time.  We are not a huge suburb and only 10 mins drive from town but up here with our wee dairy, school and community centre, and where all the local kids come out and ride their bikes in the street and run between each others houses, it feels like we could be miles away in both space and time.  And that can only be a good thing :-)
Posted by Alison at 9:35 PM 1 comment: