Recently, well over a month ago, the daycare centre that Miss M attends had their annual Cultural Dinner.  This is the focus point of a couple of weeks of activities they do embracing the wide variety of cultures represented at the centre.  Everyone takes along a dish from their country of origin and much fun is had by all.
Mr A is always keen for any excuse to dress up in his kilt but I was stuck when it came to Miss M.  Good old Mum to the rescue though.  She was looking for something in a cupboard just a few weeks before and came across a kilt that she had made for me when I was not too much older than Meg.  So here they are, Mr A dressed in his family tartan and Miss M dressed in a kilt that her Gran made for me :-) 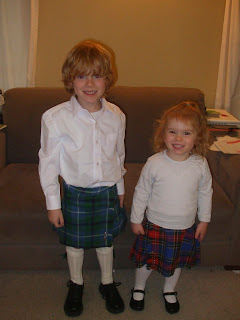 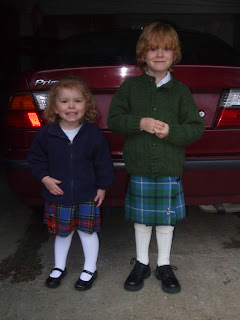 And a couple of snaps we got at the event. 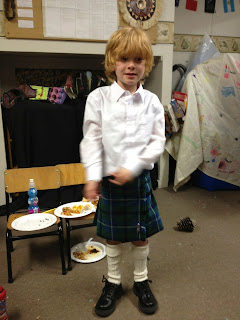 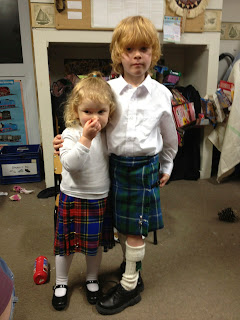 Miss M actually got to dress up again a week or so later when we went in to show off 'all things scottish' and do some ceilidh dancing with the kids.  Mental note to self, attempting ceilidh dancing with about 20 pre schoolers may not have been my brightest idea ever :-)
Posted by Alison at 8:56 PM 1 comment:

Yes see I haven't fallen off the face of the earth, I've just been crazy busy with a whole lot of stuff that has keep me away from the blog.  One day I might try and catch up, but for now I will just share this quick and fun wee activity we did the other day.

I had Mr A home 'sick' from school so we decided to set up some craft stuff and I made this fun rainbow rice.  I found a recipe online (of course) but since I'm pretty rubbish at actually following recipes I just made it up as I went along.
We got a bag of cheap rice from the supermarket and put about half a cup into some snap lock bags (or you coud use any container with a lid.  To each bag add a few drops of food colouring (you can always add more later) and a dash of white vinegar (scientific that eh?).
Here are our bags. 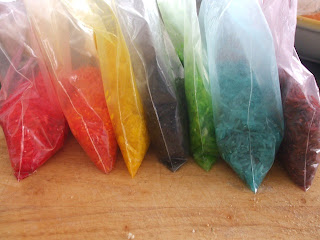 Then we tipped them into containers and left them out to dry for about half an hour or so, this would have been quicker had it been a warm sunny day. 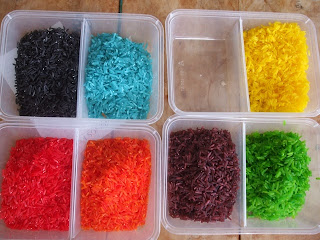 The kids decided they wanted to mix it all together and it looks pretty cool. 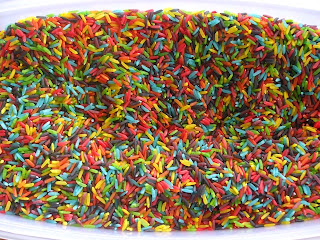 They then spent ages making pictures by gluing it onto paper and just generally playing about with it.  Cheap, easy and fun, plus it is now stored away for use again next time ;-)