This project has been somewhat of a labour of love.  I have wanted to make Miss M a winter wool coat for a couple of years but haven't ever been brave enough to actually get around to it.  This year however I got separate inspiration that pushed me into it.  Way back at the beginning of the year I signed up for a "Yellow/Grey Challenge" run through a Facebook page.  Twelve people signed up and everyone sent in 4 fat quarters of fabric on a yellow/grey theme.  Then we all received 48 charm squares and had until the end of April to create something with them.
At the time of signing up all I was thinking of was the pretty fabric, however when faced with a pile of tiny squares I realised I was probably way out of my depth, I don't do patchwork!  After much trawling of the internet for what to do with 48 charm squares I was still at a loss, then the idea of the coat starting creeping back into my thought processes.  A little maths told me that I would probably have just enough fabric to patchwork a coat lining from my charm squares and it all grew from there.
This project would never have got off the ground had it not been for Jennie the fantastic tutor at the monthly sewing workshops I attend.  She held my hand through all the new techniques I tried and gave me confidence to actually get this thing done.  Over all this took 3 full sewing workshop days plus many hours at home to complete but I got there and I got there on time.
First port of call was my vintage pattern collection.  I found a gorgeous pattern but it was a size 2 and Miss M is now 3.5!  But she is 21" chest which is the size the coat was designed for so herein lies the first of many 'firsts' of this project.  I made a muslin!  I cut up an old flannel nightie I'd been given to use for fabric and made a mock up of the top of the coat to check the fit.  And it was perfect - woohoo. 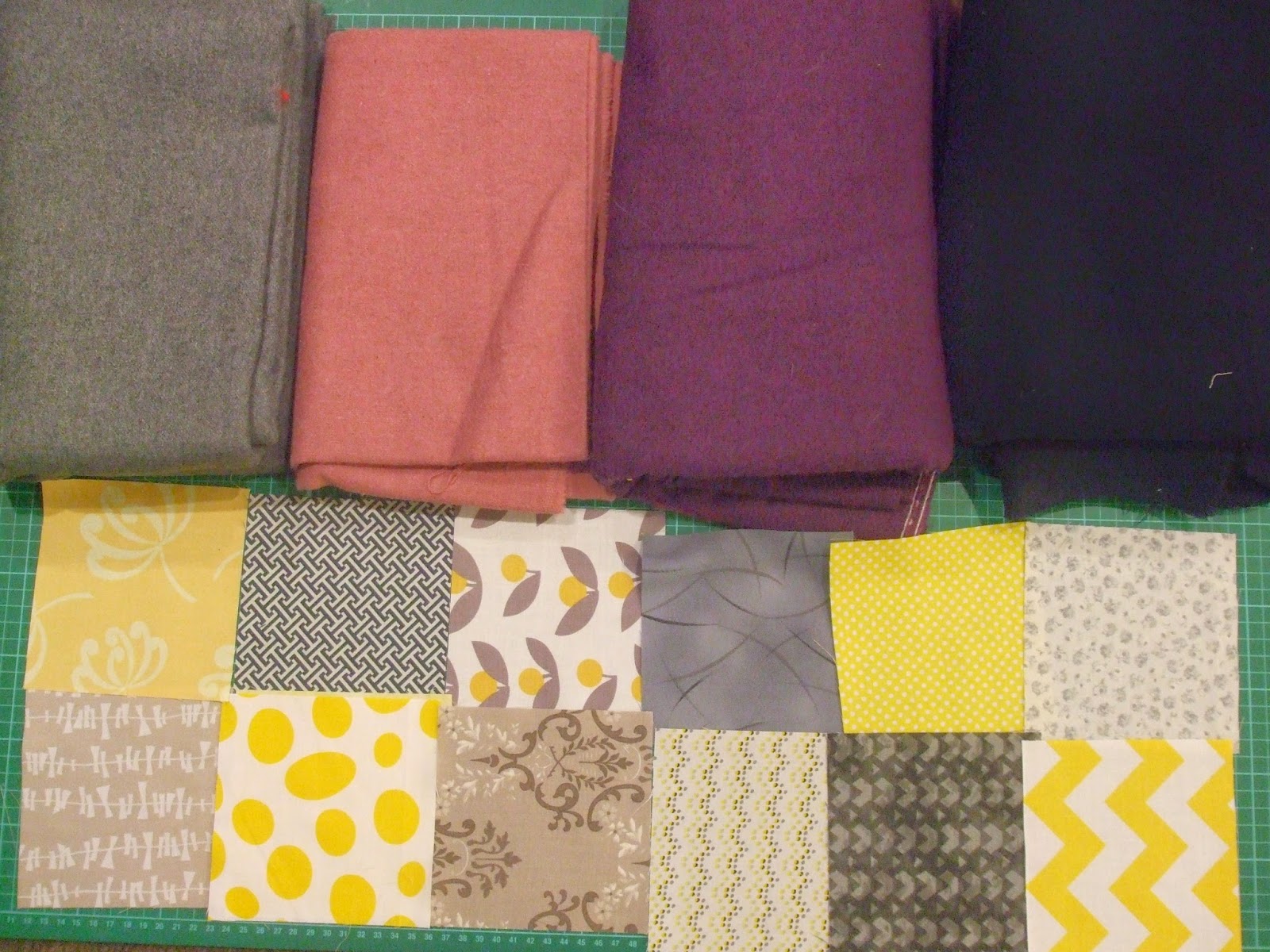 Next it was time to choose the outer wool.  I was very lucky to have a selection that had come from Mum's fabric stash.  I was immediately drawn to the grey but was worried it would be a bit drab, in the end I'm glad I went with it.
My first sewing workshop was spent very carefully patch working all the charm squares together and then very bravely cutting them out, I knew if I stuffed this part up it was all over. My first ever go at patchworking! 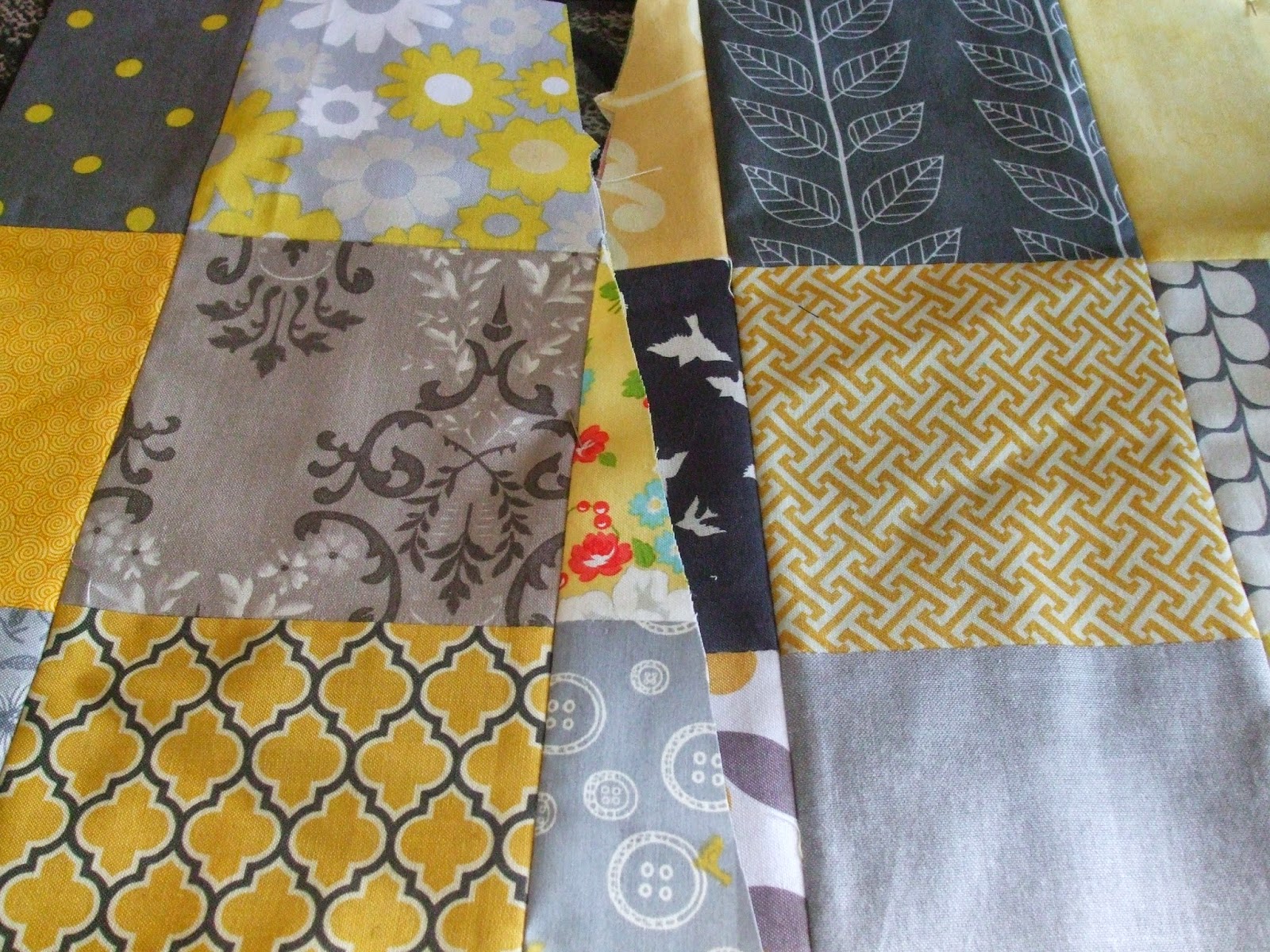 By the end of the second day I had part of the outer together and had completed many more firsts and had the front and back of the outer coat together.  I had also done the following for the first time:
*made a bias strip and turned it into button loops using piping cord
*properly stabilised the front seam of a tailored coat
*made piping 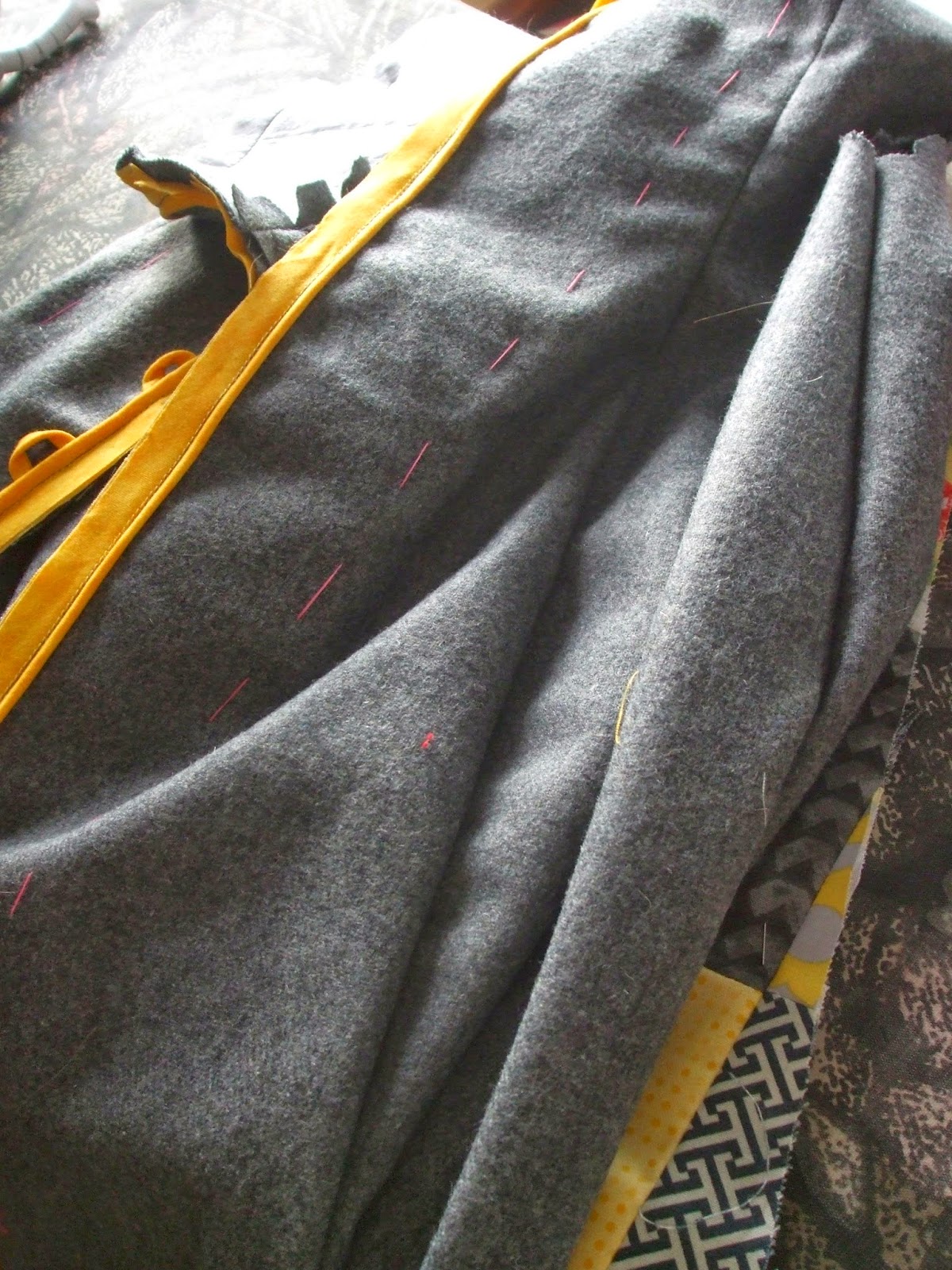 I knew I had to do a lot of work before my last workshop if this baby was going to get finished so the attaching of the piping I had to do by myself but I was pleased with how it went.  I also used bias on a hem for the first time and by the time I was back in 'class' the lining and outer were both all together and just needed attaching and finishing.
The last workshop still held some more firsts in the form of first time making covered buttons and learning how to do french tacks and to properly attach the sleeve lining to the outer to allow for movement. Phew by this time I was exhausted but with 15 mins to spare the last button was sewn on - woohoo.
So here it is straight from the workshop. 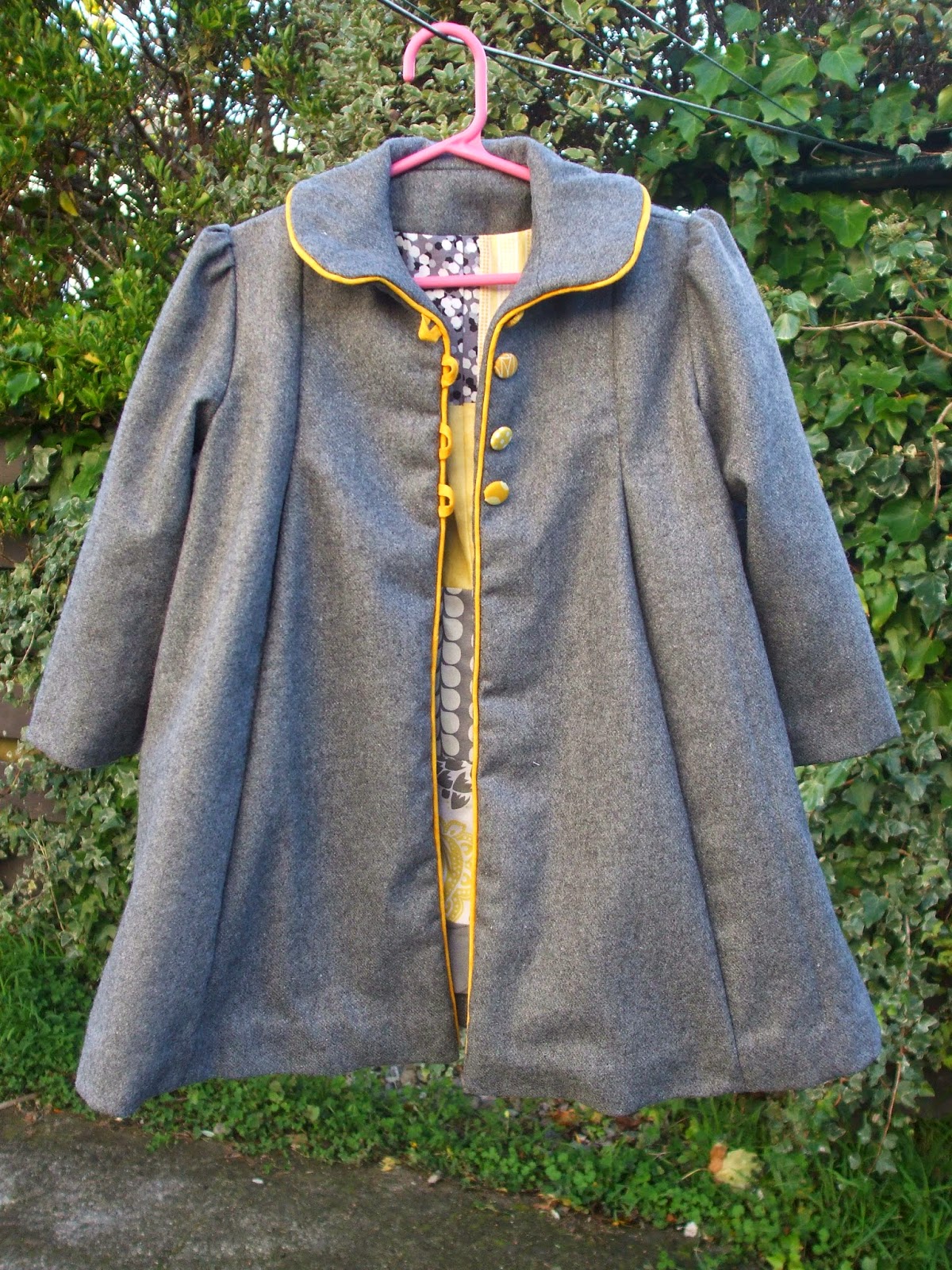 And here it is after being professionally pressed (makes such a huge difference)! 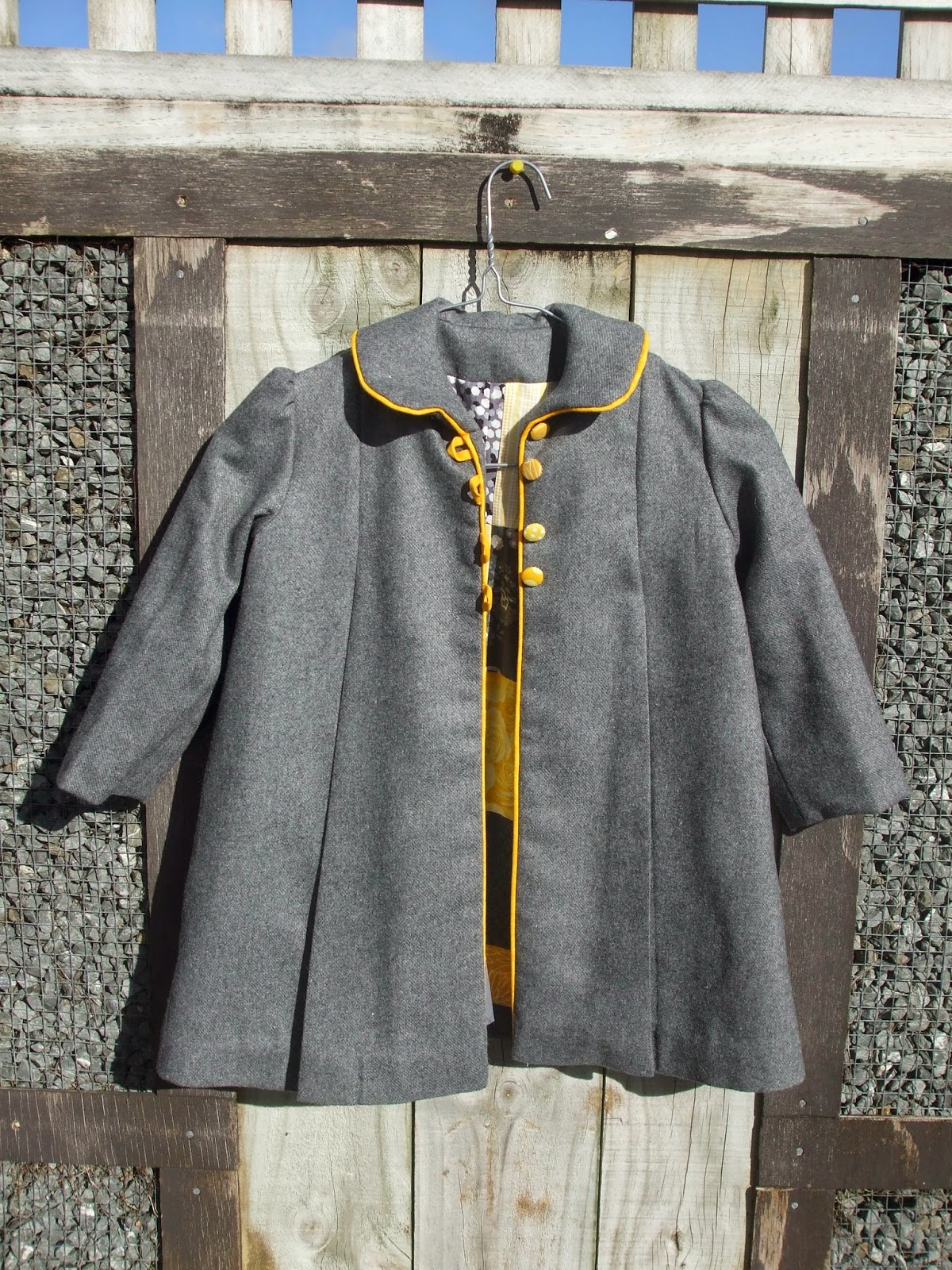 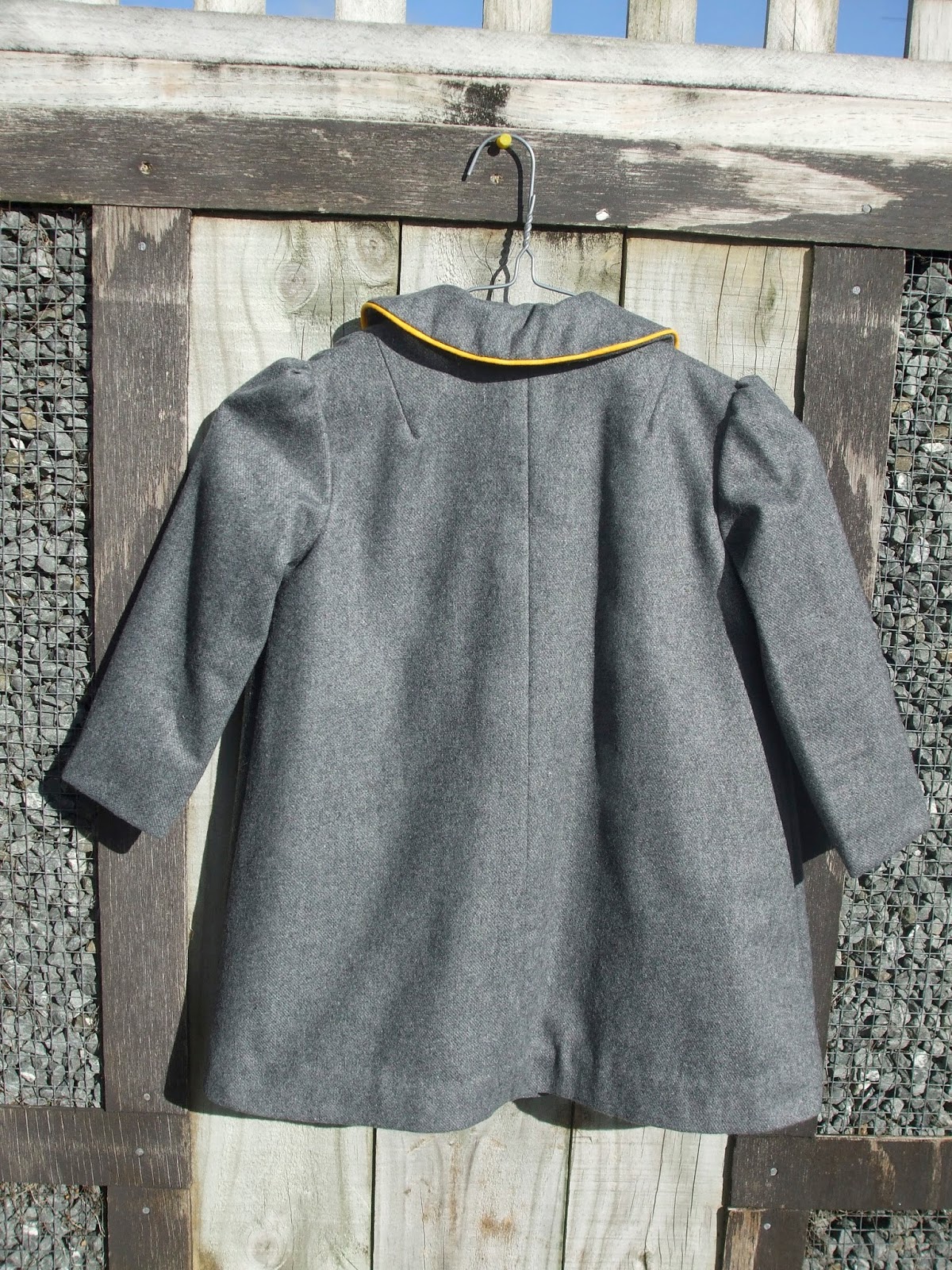 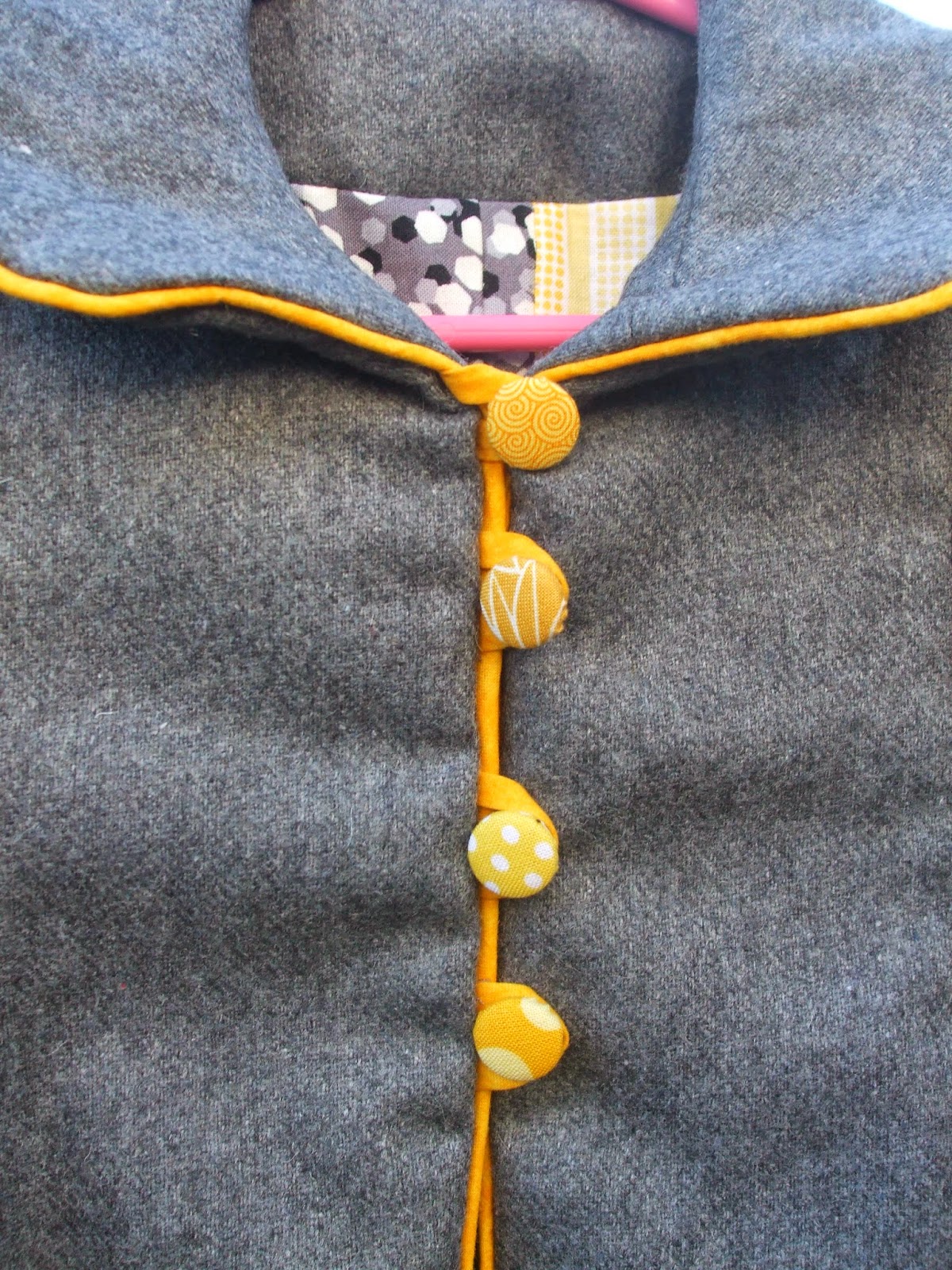 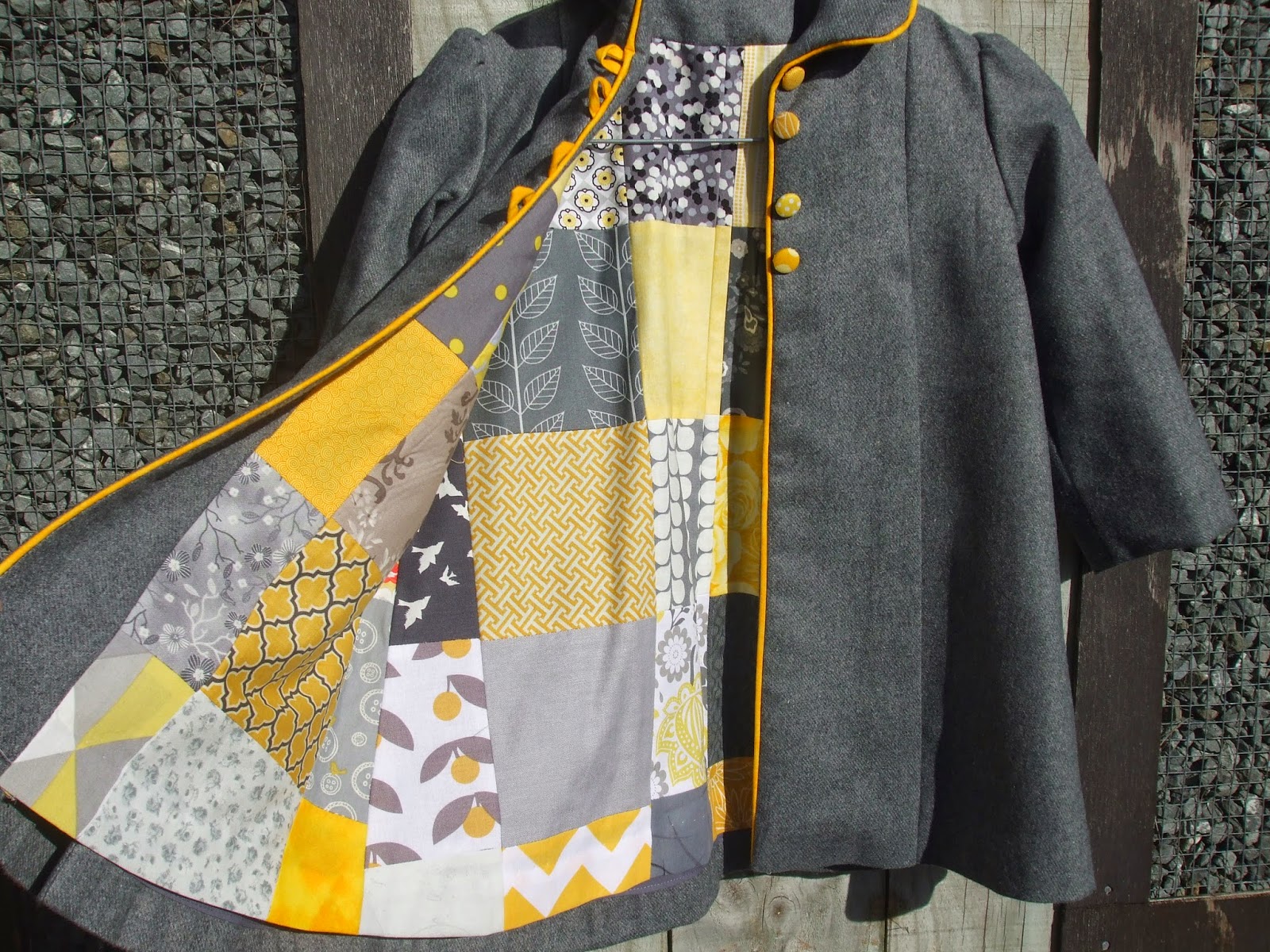 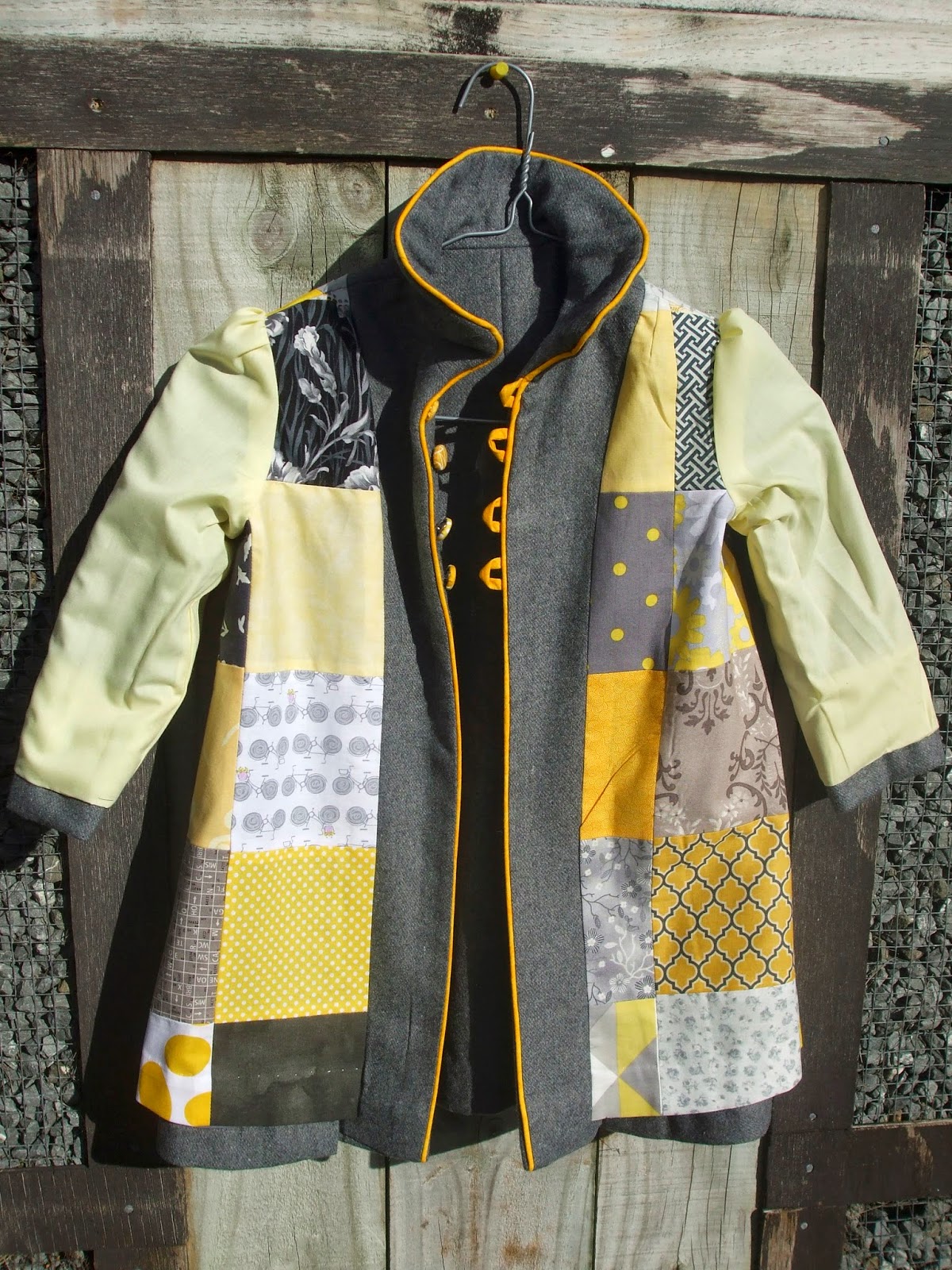 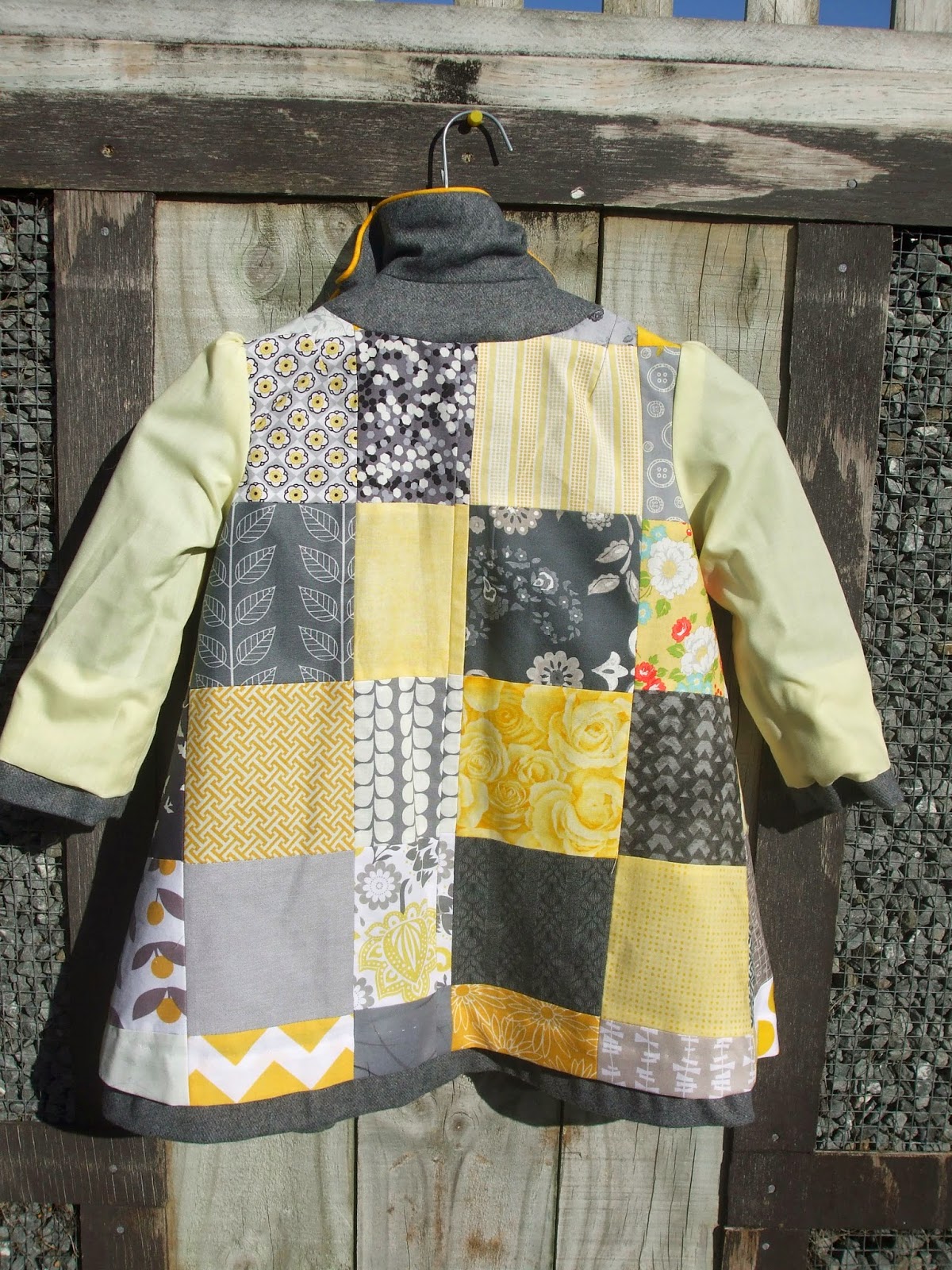 Here are some pics showing off the bias hem detail and the french tacks, very proud of these, lol. 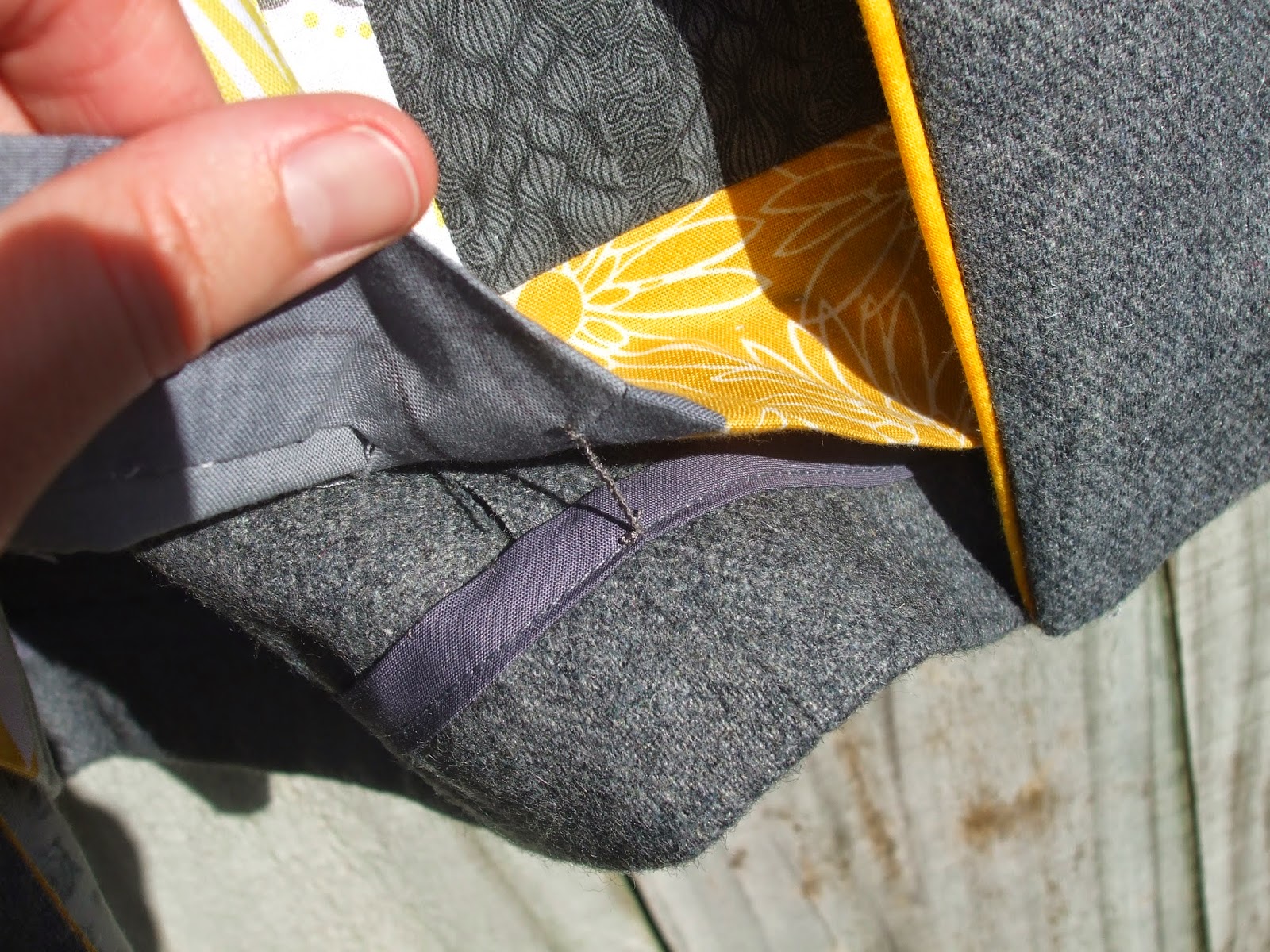 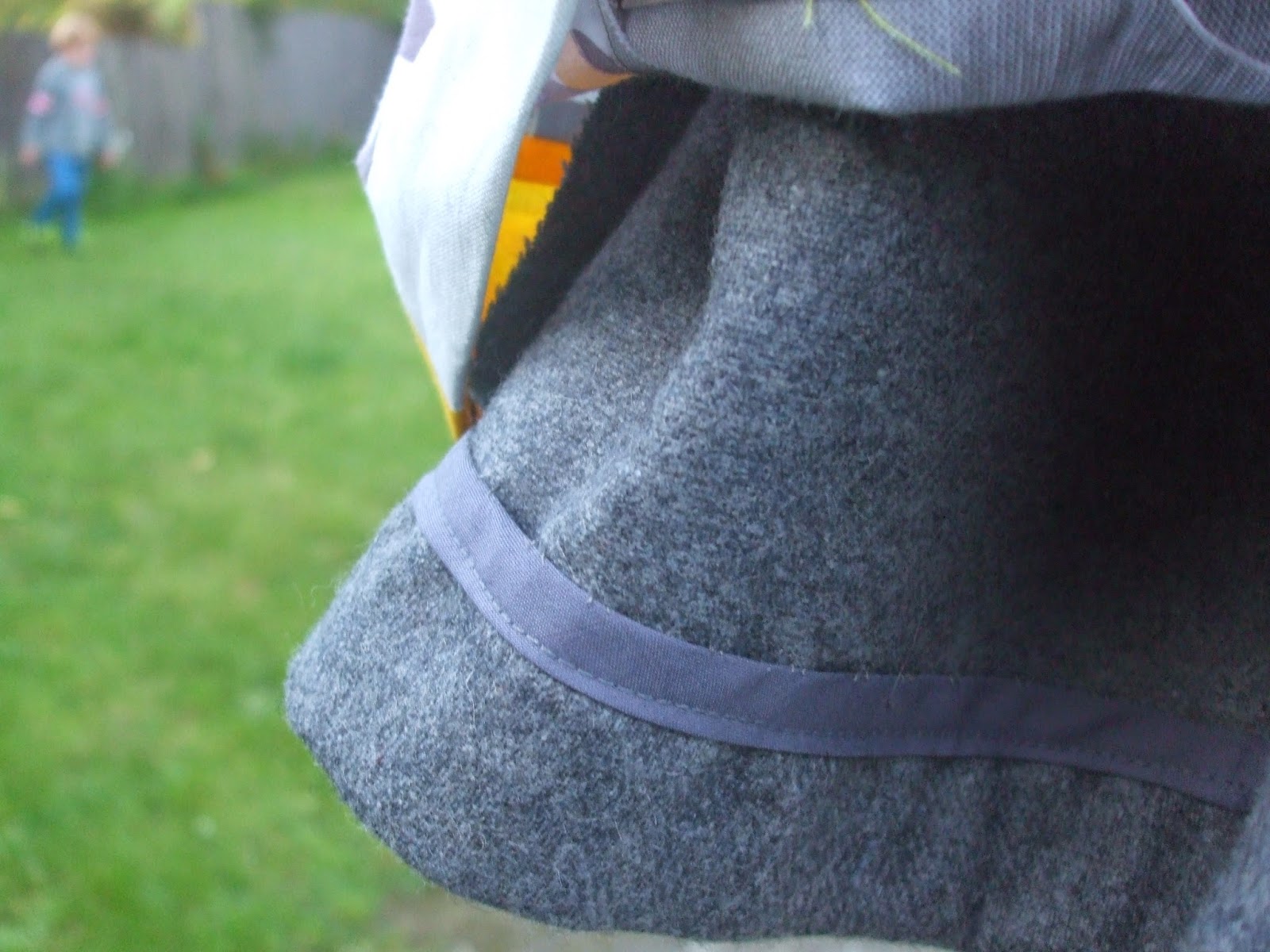 And finally on the model herself (she loves it but doesn't look too happy here because I dragged her away from something far more exciting than having her photo taken). 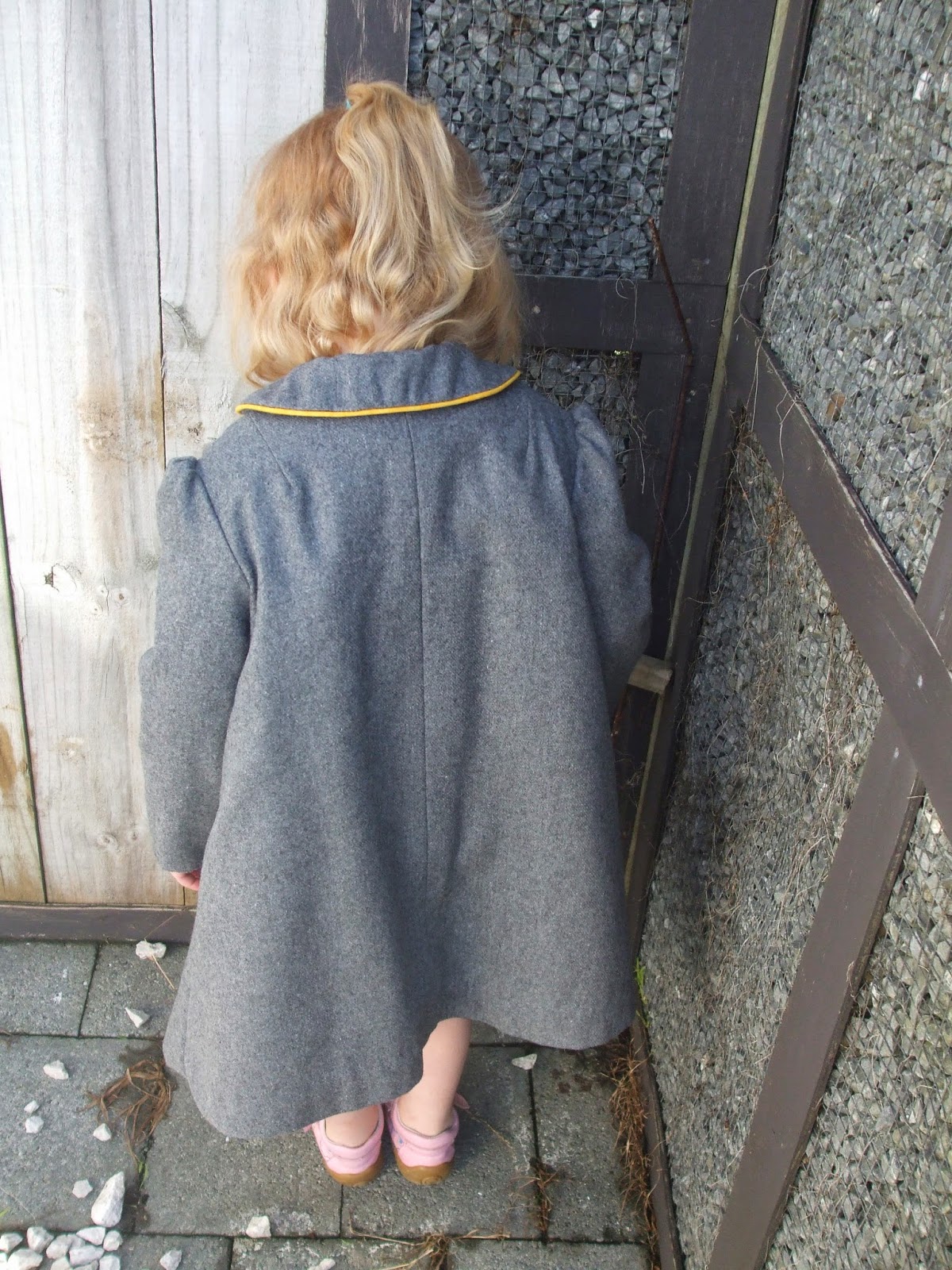 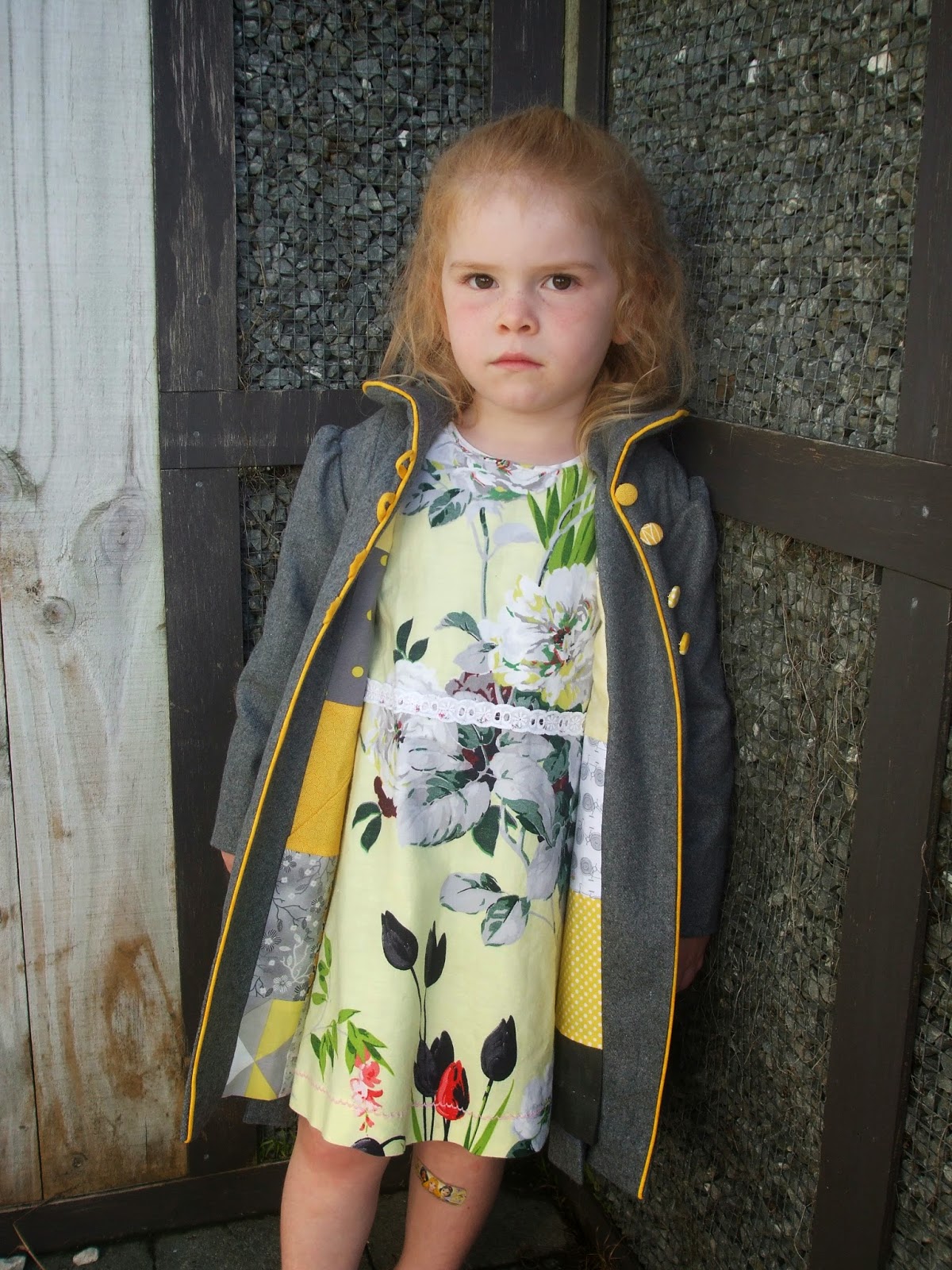 So there we go, The Coat!  Would I do it all again?  Yes, but probably for me so it won't be grown out of, and without the patchwork lining.  I am so pleased I finished this and have now learnt so many proper tailoring techniques along the way.  And now Miss M will be wearing it ALL winter.  I need to make her a yellow hat to wear with it, just having trouble deciding on the style.
Posted by Alison at 5:44 PM