As a parent one thing that never fails to astound me is the level of understanding babies have well before they are able to communicate effectively (although I am aware at how effective the crying kind of communication can be from a very young age).  As both Mr A and Miss M were relatively early walkers we were often amazed at how they could follow simple instructions well before they were doing much more verbally than mimicking the odd sound.  They could both understand things like "take that to X" or "It's bath time now" with no problems at all.
Equally as astonishing though is the desire my children have had to communicate with us and therefore feel more 'included' from a very young age.  As an enthusiastic first time mother I read a lot of blogs/books/websites about various aspects and methods of parenting (and promptly ignored most of it).  One thing I read in passing was about baby sign language and having no desire to try and teach my child full sign language I didn't think much of it.  Then I decided that a few signs could be useful so we concentrated on two simple things, a sign for 'more' when in the high chair or eating, and a corresponding sign for 'all done'.  Both the children picked these up very quickly and it has made meal time so much less stressful.  More than this though, I soon noticed that both children over time developed their own 'signs' for things.  I shouldn't have been so surprised, we all 'sign' for things constantly whether it's pointing to something or waving goodbye.  Recently Miss M has added several signs to her wee collection and now as well as the ones above she has her own wee signs for  'hat', 'shoes' and 'bath' and probably others as well that I can't remember off the top of my head.
Maybe buoyed on by this ability to let us know what she wants, or perhaps because she has a big brother that never stops talking, her verbal communication is now coming ahead in leaps and bounds.  Over the last few weeks she has gone from saying 'Mama', 'Dadda', 'Ardin', and 'hiya' (along with a constant baby babble) to adding the following words to her wee vocabulary
-Duck
-Meow
-Oof oof (woof woof)
-Baa (although we often have angry sounding sheep for some reason)
-Mine
-Bye
-Up
-Down
-Shoes
-More (often in conjunction with signing but not always)
-Maya (the cat)
-Mole (the other cat)
-Nana (as in banana)
and last but not least she has a very cute wee sing song collection of notes that is the name of her favorite soft toy.
I think it is really easy to forget just how much babies and toddlers understand just because they are unable to tell us what is going on in those amazing wee heads of theirs.  Miss M is already able to figure out what is about to happen and what needs to be done to make that happen, which is quite a complicated set of thought processes for a wee munchkin.  If we mention going out she will rush around bringing her shoes to be put on, then either find her hat or furiously start signing that she wants it before she heads to the front door and waits (not all that patiently, hehehe). 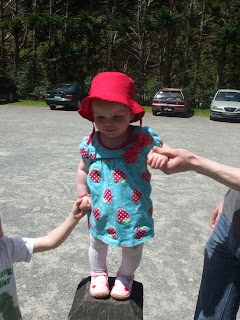 I guess this is just a set of recent observations really but we are at a really rewarding and exciting stage of Miss M's development right now and I am loving it.  I am of course also a little bit sad that my baby seems to be growing up so quickly, they don't stay little for long.
Posted by Alison at 9:30 PM