In the week or so since Christmas we have been on a bit of a mission to have a huge sort out and declutter around the house.  I got up this morning all prepared to continue with this and had my area of choice for the morning chosen, the 'corner of doom' in the lounge.  This contains a couple of bookcases and seems to become a bit of a dumping ground for anything that doesn't have a proper home, especially things that need to be out of reach for Miss M.
So during breakfast I was mulling over some of the problems at hand and mentioned to DP that we really needed a storage solution for Mr A's steadily growing lego collection.  His instant suggestion was a large drawstring bag that can be used for storage but also open out enough that you can easily see all the pieces when actually using it, removing any need to tip a million tiny plastic pieces out in the middle of the lounge floor!  So after having a quick look online and making a plan of attack it was decided that a trip to Spotlight was in order for supplies (of course I couldn't possibly have any suitable fabric in stash).  Mr A and I set out and he was quite excited about choosing what fabric he wanted for his new lego bag.  Surprisingly the design of choice has cars on it, although there was some time taken choosing between this one and a red one with sharks on.
So here it is anyway.  Cotton outer and calico inner for durability and also because we didn't want a dark color for the lining.  I simply made this out of two large circles which I overlocked together, bound around the edge with bias tape and used a second bias tape to make the casing for the cord.  Total cost all up for fabric and bias was just under $20 (cord and cord stopper were from stash). 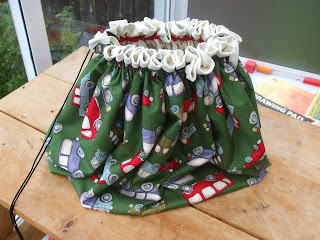 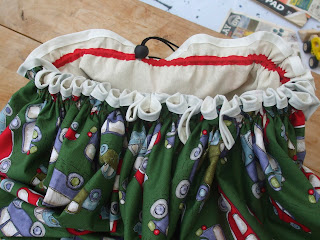 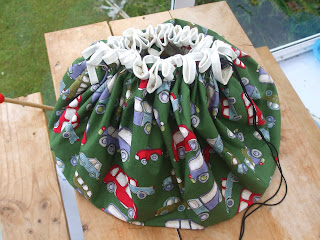 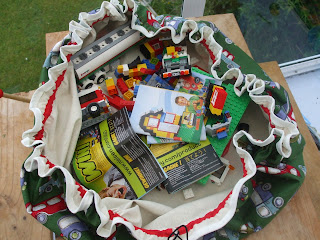 I was originally going to make the cord long enough for the whole thing to lie out flat like a play mat but decided against this thinking that low 'sides' would prevent lego from becoming scattered all over the floor.  Also the bag doesn't completely close simply because of the sheer 'volume' of the fabric once it is gathered up but this doesn't matter as long as we can store it out of reach of small fingers :-)
Posted by Alison at 10:07 PM